Before I begin, let me just warn you that- if you haven't read any other blogs entries of mine-I tend to ramble.  Especially when its about a subject I'm particularly interested in.  This time won't be any different. 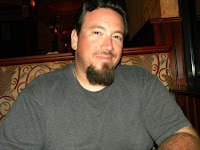 You are about to hear an awesome love story starring the sexy guy you see in the picture above -and me.  Yes, this will get all warm and fuzzy- its a love story, after all.  It all began around the Spring of 1997.

My brother and I were both attending the same high school back then and we were actually pretty close.  That's why it was hard when we were told that- since we had moved- I was allowed to stay at that high school (I was in a program that wasn't offered at any other school), but my brother had to now attend the rival school.

I was really bummed- my brother was one of my closest friends at school- even though he was a year younger- and I met most of my friends through him.  He didn't mind as much, though.  He was always the kind of guy that- even though he stuck to himself- he made friends easily and everyone ended up thinking of him as a cool guy.  It was probably partly due to the fact that he played the guitar (EXTREMELY well).  In any case, I was the protective older sister when he started to attend his new school, and I was SO happy when one day after getting off work I saw that he had left a note saying that he had been invited to join a band and not to worry- he might be home late due to practice.

Can you guess who the drummer of that band was?

There's a lot more to the story- when we first started talking and all that- but to make a long story short, after a band party they threw and a night of lots of talking and getting to know each other, we started dating and have been together ever since.

He's honestly my very best friend.  He's the world's best dad; most amazing husband ever; and the hardest working man I've ever met.  He keeps me grounded.  He's my rock I lean on when its hard to stand on my own.  And when I start to question my faith, he reminds me of Who is really in charge and that everything will be ok.

We've been through a lot in the last 14 years, but the most extraordinary thing I can say about us and our relationship is that, through thick and thin (both of us more thick than thin ;-b), our relationship has grown stronger.

Did I mention he's my BEST friend?