The Natural Disasters (my kids) 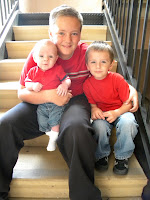 These are my "Natural Disasters".

The Earthquake
Cameron "Camo" is my oldest.  He's what I lovingly refer to as my guinea pig for parenting.  At 9lb. 1 oz., he came into the world as a force to be reckoned with.  He doesn't just walk- he stomps.  You know when he's around- and when he's not.
He's an AMAZING older brother to Jacob and Nicholas.  He's smart (too smart), funny, sensitive, and determined.

The Tornado
Jacob is my middle son.  He's a whirlwind of energy that never dies down, and he constantly leaves destruction in his path.  He's used to being the baby right now, so he tends to act spoiled- expecting everyone to pick up after him and everyone to do what he says.  The problem is, with his big blue eyes, its hard to say no.
He's sweet and cuddly, funny and -much like his older brother- EXTREMELY smart.  He figured out how to navigate the worldwide web at 1 1/2.  This can be a good thing and a bad thing- we've encountered MANY computer viruses over the years due to his love of the computer.

The Hurricane
Nicholas is my baby.  He's only been in this world for a short time, but we can already see his determination.  He hates sleeping- its as if he's afraid he's going to miss something important.  He has an infectious laugh and a beautiful smile.  He's VERY demanding- we often refer to him as our "mini master"; if you aren't giving him your full attention, he'll let you know that isn't ok with him.
So, why "hurricane"?  This boy spits up more than any other child I've ever seen.  He rivals Hurricane Katrina.  And he seems to have it in for clean clothes- especially on Corey.  If you're holding him, understand that you'll walk away with spit up all over you.