A lot of times when people talk about Peter the disciple, they laugh and mock him for all his seemingly unintelligent things he did.  One such thing was his well known "failed" attempt at walking on water.

What those people -who are so quick to judge- fail to acknowledge, though, is that Peter was also full of trust and faith in his Lord.

I don't know if you realize this, but if not, let me enlighten you- did you know that humans sink?  Its true!  Throughout the ages, mankind has struggled with the inability to keep afloat solely (get it?) by standing on the water.  I'm not joking- these are pure facts, people!

Also, did you know that, when men go off on fishing boats, they generally go out to an area where they can't see the ocean floor.

I'm astounding you with these tidbits, I know.

So, let me play this out for you: Peter- a man- was out at sea- deep water where more than just lil' fishies live- and he saw Jesus, walking on the water.  He knew WHAT he -himself- was and WHERE he was, but more importantly, he knew WHO Jesus was.  He knew that, sure, man shouldn't be able to walk on water, but he knew that if Jesus told him to, he could.

It wasn't until he took his eyes off Jesus and started staring at his, by all accounts, impossible situation, and started sinking.

Sometimes God will give you a sign as big as a billboard on the side of a freeway.  It'll have huge neon letters, flashing lights, and sirens to ensure you won't miss it.  Sometimes, however, it just takes a leap of faith that He won't allow you to get in over your head- especially if its something that you know He would want you to do.  The key is to keep your eyes on Jesus and not on your situation.

My little family isn't rich.  I'd complain more, but God has always given us enough to get by, and while we struggle financially, we have a marriage that I pray my sons will have with their spouses when they grow up.  I'll gladly trade riches for a happy marriage.

The thing about a lack of money, though, is that you really start to analyze what you can and can't spend money on:

When it comes to the things God wants you to have or do, though, God will always make a way.  All lights will be green, all roadblocks removed.  If its something you want and its in His will (meaning, its not something the Bible says is a no-no), then God will give His blessing.

Like I said, our pockets aren't deep, but when it comes to the things God wants for us, we've always gotten it.   The funny thing is, when we do what God asks of us, we're usually blessed with even more.

And, the times when its scary (especially financially) to do what we know God wants, we ask for His strength and we keep our eyes on Who we're doing it for.  Yeah, it can be terrifying- the water is deep, the storm is raging and what we're about to do seems like it can't be done- but its only truly terrifying when we take our eyes off the One we're walking towards.

So, we make a leap of faith.

Well, ok, its more of a bunny hop.  Leaps can happen later- after we've gotten our feet wet.

Hey, Peter didn't RUN on the water.  A bunny hop is more than some people make in a lifetime.

Besides, we're only human. 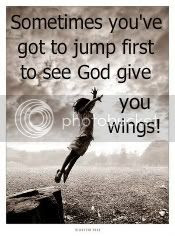 Posted by SortaSuperMom at 9:22 AM