Do you hear that?

Oh, you don't?  Well, you should- its the sound of yet another fabulous blogger giving my blog props!  Yay!  So, right now, I'd like to give a BIG thank you to Amy at From the Heart for nominating me for the 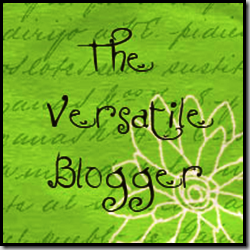 She's been feeling a little under the weather (like me), but after antibiotics and a whole slew of other things, she's starting to "feel almost human again".  Go head on over and check her out- she was nominated for 'Parent's Magazine's Funniest Mom Blog', so I KNOW you'll find her entertaining; and maybe tell her to get well soon, cuz the Blogaverse is better when she's a part of it.

Well, Amy told us not to feel that we have to follow any "rules" this time around, but I always look at them as more like "guidelines" anyways, so I've never actually felt any pressure.  But, since we're doing things a little differently this time, why don't I tell you 7 things going on at my home this morning?  That should make you breathe a little easier about your life and cause you to shout out a big 'thank you' to God this fine Sunday morning.  And, you know how I love it when people are thankful, so here it goes:

1.  My baby- Nicholas- is screaming at me from the under the desk where I'm sitting.  I had been holding him while checking email, but when he chose to hit 'send' on something (not really sure what it was) and I saw that message had been sent (not really sure to whom), I decided it was time for mommy to have her arms back.  So, if you got an email from me that seems like its gibberish- I did not have a stroke; I have a baby.

2.  Its 10:05 a.m. and I've yet to make coffee- THAT is how tired I am.  When exhaustion keeps me from even wanting to stand at the coffee maker, there's an issue.

3.  Jacob is playing with a toy dragon that -when you push its tail down, its mouth glows and it makes annoying dragon-y sounds.  Think growls, hisses, smashing noises, etc.  Nothin' like ushering in a new day with the soothing sounds of screeches.

4.  Camo is watching Prince of Persia... with surround sound.  Such a LOVELY accompaniment to the dragon noises.

5.  My two older boys have just decided that fighting is more important than breathing- literally.  I'm pretty sure I hear both of them gasping for air which means that one has the other in a head lock.  And, as I've said before in THIS entry, I wouldn't put it past Jacob as being the victor.

6.  My living room looks as if an earthquake, a tornado, and a hurricane all touched down here.  Oh, wait- they did.

7.  It has taken me an hour and a half to get this far in my list due to all of the above going on.  I still have dinner to get prepped, my Sunday devotional to write (it'll be up later), and I STILL need to get ready for the day since time seems to really fly over here and we've got church tonight.  With that being said, I'll have to post my nominees for this award with my devotional later.

Thanks again for the award, Amy!
Posted by SortaSuperMom at 11:48 AM