'But we have this treasure in jars of clay to show that this all-surpassing power is from God and not from us.  We are hard-pressed on every side, but not crushed; perplexed but not in despair; persecuted, but not abandoned; struck down, but not destroyed.' 2 Corinthians 4:7-8

Looking back, I'm pretty sure that 2009 was the worst year of my life:

And that was on top of all the other daily stressors that make you want to bang your head against a wall.

Now, I'm not going to get all up on my "morality high horse" and tell you that the devil must've seen me as a major threat and that's why I had the year -literally- from hell.  I won't because the devil doesn't- CAN'T- do anything in the life of a Christian without God's say so.

I can practically hear skeptics everywhere saying," So, you're saying God did it?"  Not necessarily.  I'm saying that God ALLOWED everything that happened to me and my family for a specific reason.

Maybe it was to make way for something better.  After we lost Christopher and the other baby after him, we got pregnant with Nicholas.  I miss my babies more than anyone could possibly imagine, but I'm thinking that God must have something pretty special planned for Nicholas, and that's why we needed him.  After we lost that home, we moved into a better one where we -Corey most of all- aren't as stressed.  And after our REALLY OLD car died, a friend came forward about how she needed to sell a car she had- which we got for a pretty great price with a pretty great payment plan.

Or maybe God allowed all of what happened to get me to a point where I'd finally start relying on Him more.  Sometimes the only time we seek God to lift us up is when life has pushed us to our knees.

Or, maybe God allowed it all because He knew that I could take it; that I would be able to walk away from the situation stronger for it.  That I would be 'struck down but not destroyed.'

Not a lot of families- marriages- can survive what we went through and come away from it stronger, but I'm not going to say that we did it through our own shear willpower.  Absolutely not.  That would be a lie, in all honesty.  There was one moment, after we lost our second baby, that I was standing in our living room, crying to my mom, and asking her why God hated me so much- what did I do that was so bad that this was my punishment?  That if He didn't love me, then I didn't want to love Him.  And after we lost the house and our car went to that big car lot in the sky, I wrote to my pastor and asked Him why God had it in for me, and that if God did anything else to me or my family, that I'd stop believing in Him.

Does any of that sound like someone who's strong enough to get through things on WILLPOWER?  Yeah, I don't think so either.

Humans- we're weak.  Much like a clay pot, it isn't until you put it through the fire that it gets stronger.  God made us this way so that we can't boast of our own greatness; so that when people look at us, they don't see how strong Amber is that she made it through all that unscathed.  He made it so that when people look at me, they see that what I went through was an impossible situation to have come out without His help and they see the scars left on my life and they ask me where I got them.

So that I can point them to The One who got me through it. 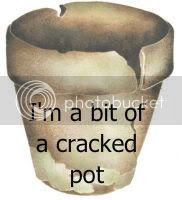 Posted by SortaSuperMom at 12:29 AM